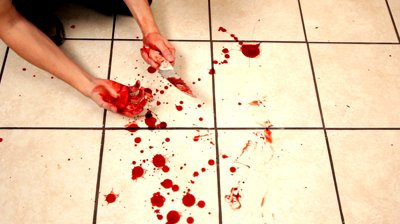 Where the fuck are my head phones? I scrambled through the drawer of my night stand. Could have sworn I put them back from the night before. Fuck. I covered my ears as his moans echoed through the walls of our three level home. I rocked back and forth on the edge of my bed hoping it would stop. But as usual, the prolonged wails only became louder. Without my headphones I could not block it out. His cries drew me to him like a siren luring a sailor to the jagged coast.
It was pitch black. The floor in the hallway was cold against my bare feet. A under shirt and sweat pants dressed my scrawny frame. I scanned the walls with my finger tips searching for the light switch. The darkness faded and I made my way to his bedroom.

Inside it smelled of latex gloves and decomposing flesh. My father lay in his bed weighing barely half his normal size. The whites of his eyes and the color of his nails had turned yellow from the constant chemo treatments. All of his hair had fallen out months prior. I set on his bed and stare at his sunken face as he groaned in pain. I could hear mucus rattling in his lungs as his chest rose up and down. I knew he was dying. I put my head on his chest, closed my eyes and let my mind drift away with his memories. Our memories.

Before the cancer my father was someone of importance. Although he was originally from New York, he worked for the U.S Army as a trauma surgeon at the Landstuhl Medical Center in Germany. He spent years operating on lacerated and wounded soldiers that had been stationed in Afghanistan and Iraq. Landstuhl was the closest treatment facility.

I was born there and spent my childhood in the nearby vicinities. Most of the children in my neighborhood had American parents who worked at the medical center as well. While my father was working, my mother and I often explored the nearby areas. At times I’d hear “Besatzungskinder” and “Mischlingskind” being mumbled and whispered. People taunting their racial insecurities at the African-American DNA that intertwined with my German blood.

My mother had eyes the color of the ocean and shoulder length hair the shade of sand. Her skin tone was olive and light brown freckles were scattered right above her cheek bones. My build was awkward, skinny and tall. At that time I wore glasses. Vision was shit. I was lighter version of my father. Dark coarse hair covered my head. I had my mother’s eyes and my father’s strong face.

I was proud to be his son.

After my father’s death my mother and I moved to the states. Memories from Germany were the best memories that I kept. As the years went by, it became harder for me to remember his voice and to picture what he looked like. He was slowly vanishing from my brain yet I’d already felt like he had disappeared from my soul. And soon I began to feel lost.

“You’re not doing it right,” I told her.

I sighed. Told “312” she wasn’t paying attention. She didn’t seem too fond of the nickname I had given her. But honestly I couldn’t even remember her name. She wasn’t that significant. Just some girl I had met earlier that day on the third floor in our condo building. I called her by her unit number.
Another five minutes had gone by and I was starting to get turned off. I could have played one of the flicks that were hidden between my mattresses and rubbed one out by now. Could have made me a sandwich and took a nap. I grabbed her wrist and motioned for her to stop.

That was the nicest way I could think of to excuse her poor hand job. I took her number with no intentions to call.

After 312 had left I took a couple of Xanax pills I’d taken from my mother’s medicine cabinet. She couldn’t function without them these days. Unknowingly to her, neither could I. I washed them down with three cans of Pabst Blue Ribbon, fell back on my bed and closed my eyes. Waited for the effects to hit my blood stream. Smiled as soon as my pupils began to amplify. Laughed the moment I entered my zone.

All the anxiety in my body seemed to slowly vanish. Numbness set over my face. My muscles relaxed and the feeling as if I was sinking into my bed began to intensify. All the bad thoughts in my head disappeared and calmness set over me. I was not at a high nor was I at a low.

I was just there.

My journey into no inhibitions was short-lived when the arguing started. Every time he came over all he’d do was bitch at her. I hated him.

He was some douche bag investment banker that worked on Wall Street. What she saw in him, I didn’t know. He was nothing like my father. He was cocky, conceded and controlling. I’d come to her defense a few times but gave up after she kept going back to him. I didn’t think she would ever leave him. Something about him had a hold on her.

Probably the fresh smell of his money. He was funding our new life.

I grabbed my jacket from the closet and planned to leave. They were fucking up my mode.

By the time I reached the hallway the yelling became louder. I turned to pass the kitchen and saw my mother on the hardwood floor, hand covering the side of her face. It took my brain a few moments to process what had happened and the next few moments were unclear.

When I came to my mother was behind me screaming.

I held a large butcher knife in my hand and I had my mother’s boyfriend backed into the side of the refrigerator. His eyes were wide and held his hands in the air. Time seemed to be frozen and I could hear my heavy breath over powering my mother begging me to stop.

“Put the knife down you bastard,” he told me.

My hand moved towards his chest. I could feel the blade push through his epidermis, rip through his tissue and crack bones in his rib cage. Blood tricked out the corners of his mouth. He gasped for air and I saw his spirit slowly fading from his eyes. I pushed the knife in further and felt it pierce the muscle covering his heart. It contracted and twitched, jerking on my hand. I held my grip until the heart stopped moving.

His lifeless body collapsed to the floor.