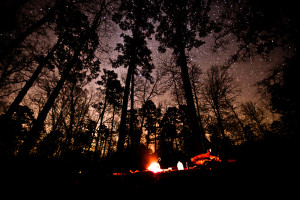 At day’s end, after dusk had come and gone, I often found myself drawn to my bedroom window. I’d open it up, let in the sounds of the night, and peer into the darkness until I saw them. Stars. I’d stare at them like a deer in headlights and wait for it to happen. But instead, they mocked me. Taunted me. I hated them. I despised those fucking stars.

Another camping trip to Bottomless Lakes. My family had been driving down from Albuquerque as long as I could remember. I-40 East, to 285 South, and southeast through Roswell. My father drove our RV while my mother leaned back in the passenger seat. They laughed and reminisced about our past trips along the Pecos River. Hendrix, my life long doppelgänger, snored in the back like a loud bear during hibernation. He’d fallen asleep a few miles before Tijeras, which was less than 20 minutes into the drive. I couldn’t sleep. Spent half of the three hours with my head buried into one of my books. Escaped reality with each turn of a page.  The rest of the time I gazed out of the window and took in the various shapes of the clouds. I let myself get lost in them as I daydreamed about the future.

This would be our last trip together before my brother and I were faced with the real world. In two weeks Hendrix would attend college on the East Coast. He earned a full scholarship and my parents were beyond proud. As for myself, I’m sure I let them down, but college had never been a thought in my brain. I only registered for a couple of classes at CNM so I could continue to stay in the house rent free.

I wanted to learn from the world with only a bag on my back. I envisioned my travels to be like the ones I read about in my books. I saw myself viewing art at galleries in Berlin, dancing the night away in the cellar clubs of Krakow, laying near the turquoise water on the sandy beaches of the Albanian Riviera, tasting sun-dried meats with cheese pairings in Leon, and hiking the trails of the Transylvanian Alps. Soon I would no longer have a reason to daydream.

For the last two years, I’d been saving. I put away most of the money I earned working as a cashier at the Carlisle Boulevard Whole Foods. My plane ticket was already booked and I planned on dropping my classes before the end of first semester.

I was close to being free.

Night had fallen when we arrived to our campsite. We quickly put our tents up and grilled a late dinner; Mexican street corn, marinated steak skewers, and spicy roasted potatoes. We set around the fire laughing and telling stories as we ate. When the most of our food was gone and our stomachs were full, my parents headed to their tent to rest. As soon as they were asleep Hendrix and I ventured into the quiet desert.

We navigated through the night with the light from the stars. Walked and talked while passing a bottle of Hornitos back and forth. My body shivered every time I swallowed it. I took in each gulp slowly. The bitter liquid burned its way down the back of my throat and warmed the inside of my chest. In no time my lips were numb and my eyes were low. We finished three-fourths of the bottle before returning to camp.

I tripped over a shrub as we approached our site. Hendrix laughed.

I crawled into my tent, stretched out, and felt my soul fade.

The morning came fast. It seemed like I had just fallen asleep when rays of light illuminated the walls of the canvas fabric. I set up slowly. Could still feel the alcohol soaking in my system as I unzipped the entrance of the tent. Eyes tried to adjust to the brightness as I stood up. When my vision became clear, I realized this was not morning after all.

Goosebumps formed over my skin. My heart felt as though it had dropped into my stomach as I tried to inhale. I placed my hand over my chest and begin hyperventilating. I was in disbelief as I peered at a beam of light that touched the sand and went all the way up into the night’s sky. So far up that it touched the stars. Pinched my arm to confirm I wasn’t lost in a dream land. The feeling was real. This was real.

Warm fluid trickled down my inner thighs when I saw them. My parents and brother stood frozen in the middle of the beam. I tried to speak to them but I couldn’t form any words. I trembled as I held my hand out and put it under the mysterious light. Reached for my mother and could grab the locket around her neck. A frigid sensation started at the tips of my fingers and slowly crept up my arm. With my mother’s locket in hand, somehow, I could pull free. The beam started to flash like a strobe light and slowly begin to fade.  When the last flash happened, my family was sucked into the sky as fast as I could blink. I managed to let out a scream in the now returned darkness. My body shook as I repeatedly inhaled and became slightly faint. I lost my balance and nose-dived. Face hit the sand and everything went black.

I could hear them all around me as I regained consciousness. My eyes opened to people in white hazmat suits walking around the campsite. Some of them collected things from the ground and placed them into small jars. Others searched through my family’s RV and tents. After a few minutes, they started to light everything on fire. I tried to sit up. One of them noticed me and ran in my direction. Pointed a large gun to my forehead.

“Don’t you move,” he demanded.

I was terrified and wanted to tell him what happened. But from the looks of things, I figured he already knew.

“Stand down,” another told him as she approached us.

“I’m following protocol,” he said, “We have to get rid of everything here.”

My heart beat sped up and my face became flushed. I trembled in anticipation of him shooting me.

“Not like this,” the woman said, “There’s another way.”

She grabbed the gun from him, swung it towards me, and hit me directly between the eyes.