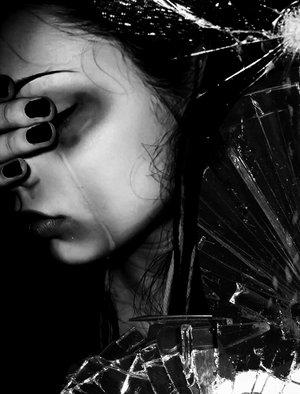 It was rare that I used my tongue when I kissed. The human mouth is a dirty place and most of the women I’d encountered were even dirtier.

But I ran my tongue over her bottom lip. I massaged her tongue with mine. I kissed her like I never kissed any woman in my life. I wanted to make her feel good. She was in pain and I wanted to take it away.

Hours prior I’d seen that oh so familiar color. The one that hypnotized my mind.

Something about the dots and splashes of the crimson liquid that began to paint the inside of the white bath tub captivated me. I stare down at the fluid leaving the lower portion of Tola’s hand. I was use to bloodshed I’d caused to others, but never had I witnessed self-mutilation. I grabbed a towel that was hanging on the rack, tore a piece off and wrapped it around her hand. Squeezed it. She stare at me with those dark eyes, tears streaming down her face. Never had I witnessed her being so weak.

“Clean yourself up,” I told her.

I let go of her wound, grabbed her other hand and made her apply pressure. She apologized for me having to see “this”. I wasn’t quite sure what to say so I just nodded.

A feeling of awkwardness filled the air and I was ready to bolt out of there. I was ready to go home, back to Hell’s Kitchen where my cabinet full of liquor existed, back to my bottles of pills in my nightstand drawer…back to not really giving a fuck.

I rinsed my mouth out in the sink, swished a cap full of Listerine and rubbed toothpaste against my teeth with my finger. The vomit taste disappeared.

My brain was telling me a big hell no. Did I really want to spend my night listening to her sobbing? Possibly slashing her wrist in my bathroom? I wanted no part of whatever “this” was. But when I looked into those dark eyes most of my skepticism vanished.

The taxi ride to my apartment was silent. I said nothing and neither did she. I craved liquor, temporary numbness to whatever was happening. I wasn’t one to deal with other people’s emotions since I myself was emotionally detached. Thankfully some relief was given when we arrived. The silver BMW wasn’t outside stalking my life.

Once inside I gave her the old “Mi casa es su casa,” line and proceeded to shower and clean myself up. I thought about asking her if I needed to hide the knives but I didn’t think my usual asshole sarcasm was needed at this time. Hoped she wasn’t bleeding out on my floor when I got out the bathroom.

Surprisingly I found Tola sitting on top of my kitchen counter guzzling down the contents of a tequila bottle. I snatched it from her hand.

“Slow down alcoholic,” I told her.

She gave me a sideways look. I knew I had my nerve. I drank some of the bitter liquor and handed it back to her. We took turns swapping the bottle until the liquid courage pushing through her veins had her talking.

I almost choked on the Tequila as she continued.

“One night I’d had enough,” Tola said, “Something took over me. I went to my mother’s room and while she was sleeping I held a pillow over her face until her breathing stopped.”

She’d left her body decaying for over a week when she finally broke down and called Sovann.

“She came back and helped me get rid of the body. But she didn’t believe me. She refused to believe that our mother would do such a thing to her own flesh and blood.”

Again, I was speechless and I honestly didn’t want to hear anymore. I stare at her. She was ruined. Broken. Her soul was lost just like mine.

I put down the liquor bottle and grabbed her by her hips, pulled her to the edge of the counter top. When I leaned in to kissed her she pushed my face away.

“What are you doing?”

I held her hands down.

I went to kiss her again and this time there was no resistance. The area above my cheeks became warm as well as inside my chest. The heat spread through my entire body and I could feel my heart pulsate near my rib cage. I went to pull up the long sleeve sweater that clung against her upper body but she fought with me to pull it back down. I sighed and began kissing the outer portion of her ear. She moaned and her deep breaths tickled the side of my face. Again I began trying to remove her sweater. Tola’s facial expression read nervous but she gave in and let me take it off anyways. Shock. Not only did the cuts exist on her arms, they covered her chest, stomach and waist. I unbuttoned her pants and pulled them down to her ankles. Wounds covered her thighs and legs as well.

I shook my head.

I proceeded to pull her pants all the way off. I kneeled down, ran my lips up her legs and against her inner thighs. Picked her up, wrapped her legs around me and carried her to my room.

I kissed all those cuts on her body. Kissed her lips. And for the first time in a long time.. I felt.