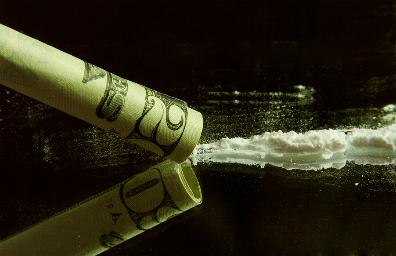 It wasn’t the first time I saw someone do disappearing acts with white powder. She leaned her face against the glass mirror and like magic the line vanished. She smiled at me, her grin displaying a “ta-da”.

“Want some?” she asked in a thick European accent.

I shook my head.

“Sorry I don’t play with my nose.”

Her glossy eyes reflected a “more for us” type of stare as she passed the mirror to her friend.

I set in the middle of a club king size bed of the Capri Hotel in the South Hamptons. I wore a black suit and black tie which was now loose around my neck. My white collared shirt was damp from the alcohol I’d spilled on myself. After taking numerous shots I took a bottle of champagne back to my room. Ran into two Russian broads on the elevator who were now skiing slopes at the edge of my bed.

They both had blow up doll lips and manufactured breast. One had long bleached hair and the other was a brunette with a shoulder length cut. When I first encountered them I assumed they were prostitutes. I made it clear I had no desire to pay for any pussy.

“No pay. Just party,” the brunette responded in broken English.

I noticed the huge diamond on her ring finger and the liquor in my system allowed that factor alone to make my mind somewhat at ease.

I was beginning to get extremely bored as the two of them snorted the walls of their nostrils thin. I needed my own pharmaceutical. I dug a plastic pill bottle out of my pocket and gulped down three Xanax followed by more champagne.

The two of them giggled like school girls as they started to snort lines off of each other’s body. Their laughter grew louder and my mental state started to become distorted.

Breathing was heavy and slow. I tried to force my eyes to focus. Giggles turned it moans. Lips touched mine while other lips touched my neck. One set of hands began to undue my pants, the other set was already halfway under them. I leaned back and a calm sensation covered my body. I felt like I was melting.

The blonde’s head moved up and down between my legs. My lower body muscles tightened every time the tip of my penis hit the back of her throat. A few moans escaped her gagged mouth as the brunette felt up her dress from behind. She moved her mouth on me like her life depended on it. No hands. Wet. Sloppy like I liked it. I leaned my head back and closed my eyes. The darkness of the inside of my eye lids lit up with flashes of color. Lines of yellows. Spots of oranges. The cardiac rhythm of my heart sped up as my blood pressure increased. My face became hot and an anxious feeling filled my chest. I grabbed the back of her head and pushed it further down as I inhaled deep. When I exhaled all that had heightened released into her mouth.

I slowly caught my breath, reached over to the night stand and grabbed the champagne bottle. I drank it as I watched them. The brunette tasted me from the blonde’s tongue as the rubbed on each other’s breast through their dresses. They moaned in harmony. I made my way behind the brunette, champagne bottle in hand. Tore her black dress from the back and ripped it off. I rubbed my hand up her thigh and could feel the heat before it even reached her center. She dripped on my hand like a leaking faucet while her and her friend continued to kiss. I dumped the remaining contents of the bottle down her chest and watched it flow down her naked body. I threw the bottle to the floor. Grabbed her neck and made her lean against me with one hand, forced her legs open wider with the other and looked into the blonde’s blue eyes.

With no hesitation she did as she was told. Soon enough the brunette was screaming to God and her nails dug into the skin of my arm. I moved from behind her as she continued to yell. Her “Oh God’s” were now turning into “Oh fucks”. I grabbed a rubber out of my pocket and went behind the blonde. Lifted up the back of her dress and slid myself inside her.

I woke in the morning to the sound of my hotel door slamming. I slowly set up in bed. Yawned. I looked to the left of me, and then to the right. Most would have been in shock from what I saw. But I wasn’t. I was nonchalant.

The white sheets were stained in splashes of red. The two Russian women, one on each side of me, were dead. Both were cut open like frogs that had been dissected in a middle school science class.

I’d been deceptive. I had put myself in the right place at the right time. In the elevator I was an actor.

It had been weeks now that I’d been working with them. With the sisters.

They were from Cambodia. The younger one, who popped that rubber elastic around her wrist, went by the name of Tola. She was quiet and only spoke when necessary. Her eyes always seemed dead and her motions often zombie like. She always seemed to exist in the shadows. She was an introvert. Her older sister Sovann was the opposite. She liked to talk, she liked to be the center of attention. Sovann was an intellectual and she enjoyed making everyone feel like a complete idiot any chance she got. She was an asshole. We had that in common. She was also a mut like me as well. Unlike Tola, who was full-blooded Cambodian, Sovann was half Chinese. One night while she was detaching someone’s heart, she’d told me about the large immigration from China in the 1920’s. She liked to give history lessons as she operated.

Sovann had gone to medical school in Singapore and left Tola behind in Cambodia with their mother. She only worked as a doctor for a few short years before she was recruited in the Black Market for organ transplants overseas. She’d traveled throughout China, Egypt, Israel, Pakistan and many other countries. She bought organs from willing donors and sold them for more than triple the money to people who were able to come up with the cash. After almost getting caught overseas she had gone back for Tola, brought her to New York and paid for her to go to nursing school. Sovann developed a scheme to make more money if she could guarantee the organs were healthy. That’s where Tola came in. She’d scout out patients at the hospital she worked for and find matches for Sovann’s clients. Unexpectedly these people would wake up in an alley somewhere, stitched up, with an organ missing. Depending on the organ Sovann needed, some wouldn’t wake up at all.

The Albanian man I had gutted in my apartment went by the name of Bujar. He and Sovann had worked together since she first got involved with the illegal organ trade. Needless to say, she wasn’t quite thrilled that I had killed her partner. And now my debt to her was filling in as his replacement.

My head was on the verge of pounding and the area below my eyes was heavy. I sighed, rubbed my forehead. I took the enormous ring off the brunette’s now lifeless finger and scooted around her corpse to get off of the bed. Wasn’t sure where my boxers had ended up so I grabbed my pants off of the floor and stumbled out the front door.

Sovann leaned against the wall. Her dark hair was brushed completely back with the sides tucked behind her ears. A small diamond earring rested on each lobe. Her angled eyes were covered by black sunglasses and red lipstick colored her lips. Her frame was petite but curvy.  She wore a long black pea coat. Underneath was a tight grey dress that hugged her body and overly expensive matching heels were on her feet.

She was a label whore.

She held a white cooler in her hand full of fresh Russian organs.

“Mixing business with pleasure,” she smirked.

I leaned next to her against the wall to catch my balance. I was somewhat dizzy. I rubbed my bare stomach.

As I talked the air around me smelled like liquor.

“I didn’t realize it had to be done a certain way. I got them here and the job was completed.”

She laughed, “You won’t realize shit if you’re always drinking. One day I’ll be finding you a new liver.”

Sovann dug into her coat pocket, pulled out a thick white envelope and handed it to me. I nodded and thanked her for my monetary compensation.

“Get rid of these bodies, clean up this mess and sober up. I need you to go to Tribeca with my sister later.”

All I wanted to do at that moment was sleep. But the money motivated me.

———–
By noon I found myself in an unfamiliar town home in Tribeca making a sandwich.

Something about the crust around bread killed my appetite. I slowly cut the edges off the wheat slices of Sara Lee. I layered one piece with turkey and stacked three different cheeses on top. I carved up a tomato like I was a contested on Iron Chef, added it and squirted mustard in perfect parallel lines. Placed the other piece of bread on top. Before I could take a bite I was interrupted.

“We need to go,” she told me in that monotone voice.

I pointed to the sandwich that was centered on a white ceramic plate. She glared at me with those dark eyes and began popping that damn rubber band against her wrist.

I stood there trying to figure her out. The cold distant look she always had in her eyes and the way her facial expression rarely changed. All of it had me curious.

Tola wasn’t perfectly polished like her sister. Her clothes were simple, her look was plain. Her dark hair was usually worn straight, down with the part in the middle, just like when I first met her at the bar. She didn’t wear make up and she didn’t need it. She was somewhat awkward, but I liked that about her.

My mouth was salivating. I took a bite of my sandwich and a small amount of ease set into my stomach.

I walked over to the pantry of the large kitchen I was in, sandwich in hand, and opened the door. The man whose home we were in set tied up on the hardwood floor. His eyes were blindfolded and mucus ran from his nose. He sniffled and cried like a little bitch. I assumed he thought he was going to die but this particular job only required a kidney. I began to tell him to suck it up and grow some balls until I caught a whiff of an awful stench. The front of his pants was wet.

“Did you really just piss on yourself?” I asked.

I was disgusted as I took another bite of my sandwich.

Tola nudged me out of the way.

She jammed a syringe into his neck. Again, her facial expression never changed and the pattern of her breathing remained calm. She could have done this in her sleep. As her hand removed the needle he began to black out.

I finished my sandwich as Tola carved out the man’s kidney. Her technique wasn’t as clean as her sister’s but she still got the job done. I cleaned up my mess in the kitchen as she sewed him up.

Just another days work. Another wad of money in my pocket.